Other Things I Saw On the Way

Kilometers are shorter than miles. Save gas, take your next trip in kilometers.
—George Carlin

I forgot to mention a few things:

Between Paris and Brussels I stopped to visit a friend in Lille, right on the border of Belgium and France. There are cannonballs stuck in the walls of the Flemish apartments, and the city boasts that its museum's collection is the largest in France after the Louvre (though I don't think anyone knows how many facts are bent to make that claim).

My friend's parents showered me with Italian hospitality, even though their English was rusty and he had to translate both ways. I tried to learn a few words like "Grazie" to help out. They opened two bottles of wine to accompany a big Italian dinner, then invited me to help start a resort in their hometown of Acquapendente in Latium, Italy, which must be the nicest place in the world.

My last day in Paris was also very gratifying. I walked up to the top of Montmarte, a nice neighborhood and the tallest point in the city. From under the Sacre Coeur I could kind of make out the Eiffel tower against the glare. It was a sunny Saturday, and an American jazz ensemble played "Georgia On My Mind" in a square next to a carousel while all the Parisians clapped.

The city's surly inhabitants came out en masse to enjoy what was probably their first nice weather weekend all winter. They packed the lawns of the Jardin des Tuilerios under the Louvre and didn't mind having to leave their coats on. 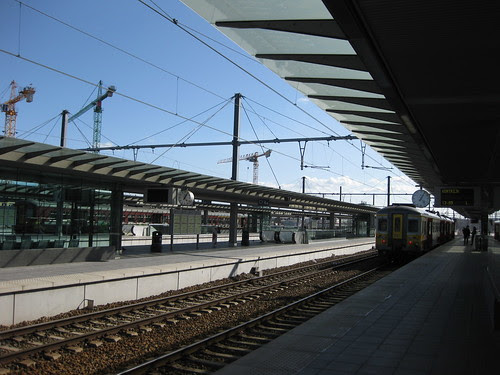