The Things They Carried

If you don't want it, we'll take it;
If you don't want to give it to us, we keep walking by.
Keep going, we're not tired. Got plenty of places to go,
Lots of homes we ain't been to yet.
West Side, Southwest Side, Middle-East,
Rich house, dog house, outhouse, old folks house,
House for unwed mothers, halfway homes,
Catacombs, twilight zones,
Looking for techniques, turntables to gramophones.
—The White Stripes, "Rag & Bone"

For my twenty-third birthday, I thought I'd look at how my inventory has changed since I first left home four-and-a-half months ago. To lose items when you change residence every day is inevitable; to accrue new one when you're halfway around the world is also to be expected. But really, there's nothing extra that I wish I had brought, except maybe a good pair of walking sandals for the Mediterranean, or an extra pair of light socks.

I lost the chain to lock up my backpack in Cologne, my clothesline in Vienna, a pair of underwear in Sarajevo, and my jacket in Budapest, to theft by some stoner. I've largely replaced the essential items: the jacket with a shit-brown sweater from a secondhand store in Kotor, and the underwear with two pairs from a Montenegrin market hall, bringing my total pairs to four (I hope this resolves the general anxiety over my Underwear Situation). I've been replacing soap with bars from hotels. I lost my pack towel when I put it in the overhead rack of a bus in Croatia to dry and forgot about it, then lost my hand towel in a similar manner in Laconia, and am now using a pristine white one appropriated from a deserving hotel.

To my clothing, I've added my Albania T-shirt, now famous in Athens, and a cheap pair of Albanian swim trunks, along with the sweater and the underwear. I sometimes wish I had a pair of shorts, but those aren't really feasible for hiking around in the brush, or for Muslim countries where shorts are a Western disgrace.

My camera screen malfunctioned on Ithaca. Luckily I got a model with a viewfinder, so I can still take pictures. However, the first few attempts were marred into unfocused blurs by some setting I had to turn off blindly, so my photographic coverage of the island is a little sparse.

I am on pen number eleven, notebook six, and notepad three. By the time I reached Athens, I had nine paperbacks weighing me down, acquired from used book stores or from the hostel grab bag. Now I only have three: T.E. Lawrence's Seven Pillars of Wisdom and two Greek guide books (thanks Mom!).

Other than Greece, I haven't used guide books much. I got one for the Western Balkans from two Americans in Sarajevo, and had a map when I was in London and a discount guidebook for Paris, which was definitely worthwhile. For most of the big European metropolises, though, the hostels or tourist agencies pass out maps with all the good sights on them, which are much easier to carry, and I've collected a good pile of them along with other brochures. I figure if I collect something it might as well be free maps of towns, museums, and archaeological sites. I mailed most of these home from Greece.

My most treasured belonging is my pair of LOWA boots, which use has darkened from the light gray of the stock item to a metallic coal color spotted with brown. Good footwear is more important than any other item, except maybe water, on any trip anywhere, and is worth any price.

Anyway, so that's my equipment. 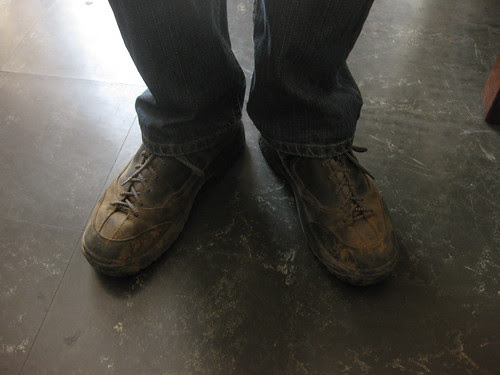 In Greece you only celebrate your birthday for a few years. After that, the annual holiday to honor the achievement of staying alive for 365 days is held on the sacred day of the saint who shares your name. The Greeks hold a party, exchange gifts, and share out food and drink to passing friends.

It's strange to think I've been away from home for close to five months, and will be even stranger when the Fourth of July comes around, and Thanksgiving and Christmas, and I have to track down Americans for fireworks and turkey. But you get used to anything. I don't usually regret traveling alone. I enjoy the freedom of solitude, and have seen enough of other travelers to know that the intimate compromise of travel, which is really only a ceremonial and sexual step away from marriage in its loss of privacy and self-reliance, wears down friendship like a gale and renders a companion's once endearing ticks fulsome and abrasive, and their faults unbearable.

This blog has become kind of cumbersome, especially with that last post aspiring to 7000 words. It doesn't really matter if no one except my mom reads the walls of unedited text I distribute; I write as much for selfish reasons, to process and inscribe all that I've seen, as to inform others of where I am.

In any case, I'll never forget you, no matter how outcast my wayfaring corpulence becomes; and whether I am contemplating the antiquity of this country or the weirdness of the next, you are ever in my thoughts and my fond remembrance, and I pray your most undeserved companionship will rechristen my eventual return. I miss you all, and I hope the occasional stories of my experience flare a cigarette's ember in a dark place, a glare which fades other trans-Oceanic fears, and looks towards an eternal and feline curiosity of our ancient origin.
Greece
Location: Athens, Greece