Showing posts from October, 2009
Show all

- October 29, 2009
I don't want to go in the fire, I just want to stay in my home; I don't want to hear all the liars, I just want to be with my own. —The Dodos Merry Thanksgiving, O avid reader , and forgive this one his lack of haste in telling an unhasty tale. Here we cover the country on the River Jordan, up to the Walls of Rum, though since the conclusion of this chapter I have passed on across the Red Sea to the beaches and reefs of Noweiba and Dahab. On the 23rd my friends and I came to Cairo, and I am one of the few Americans who on Thanksgiving visited the Post Office and the Pyramids. The street carts serve yams, and though the restaurants lack turkey, they roast chickens and pigeons. Tomorrow is Eid, and the streets will flow with the blood of Mohammedan sacrifices. However strange your family may be, this is well stranger. I had arranged to meet the Aussie girls, Kate and Amelia, plus Jean and Keith in Amman on the 23rd of October for Kate's birthday, and that morning woke up in D
Post a Comment
Location: Wadi Musa, Jordan
Read more

A Patched and Parcelled Thing

- October 22, 2009
Syria remained a vividly coloured racial and religious mosaic. Any wide attempt after unity would make a patched and parcelled thing, ungrateful to a people whose instincts ever returned towards parochial home rule. —Lawrence of Arabia Saira sent me this article from National Geographic magazine , titled "Shadowland," about Syria and its newly central role in Middle Eastern politics and foreign involvement. Don Belt writes: "Syria is an ancient place, shaped by thousands of years of trade and human migration. But if every nation is a photograph, a thousand shades of gray, then Syria, for all its antiquity, is actually a picture developing slowly before our eyes. It's the kind of place where you can sit in a crowded Damascus café listening to a 75-year-old story teller in a fez conjure up the Crusades and the Ottoman Empire as if they were childhood memories, waving his sword around so wildly that the audience dives for cover—then stroll next door to the magnificent
1 comment
Location: Amman, Jordan
Read more

- October 21, 2009
Leave the matters written of in the first eleven chapters of the Old Testament out, and no recorded event has occurred in the world but Damascus was in existence to receive the news of it. Go back as far as you will into the vague past, there was always a Damascus... To Damascus, years are only moments, decades are only flitting trifles of time. She measures time, not by days and months and years, but by the empires she has seen rise, and prosper and crumble to ruin. She is a type of immortality. —Mark Twain Damascus, the oldest city on the earth , shows all the signs of gray aging. Its ancient landmarks bear modern attempts at smoothing those wrinkles through injections and time-consuming treatments. The long high hall of the Souq curves inward from the city ramparts and the statue of Saladin. Ancient walls open to new stalls that the package tourists peer into, and the stall-tenders say, “Hello, where are you from?” That tunnel of commerce opens onto a square with the remnants of Rom
Post a Comment
Location: Damascus, Syria
Read more

Midnight At the Oasis 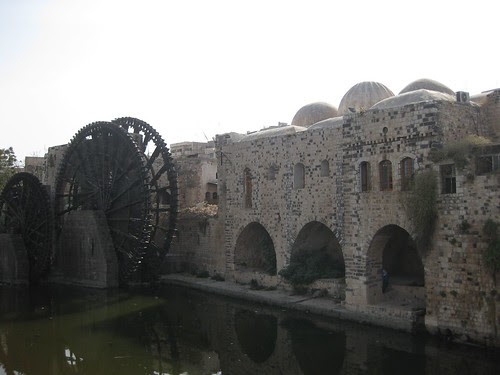 You were in the oldest city in the world—you must have seen something besides pretty women, places to buy whiskey, and the rooftop. —My Mother When Jean checked into the Riad Hotel in Hama, the man at the desk, a Palestinian named Abdullah, asked him, “When will your friends be arriving?” “Later I think,” said Jean. “They're taking the bus.” “The young man and the old man, right?” “No,” said Jean. “A man and a woman, Jon and Saira.” At the time Jean thought nothing of this supposition, but later it became an injection of paranoia in a conspiratorial pharmacy. Just how many pairs of Mentor and Telemachus traveled Syria, that Abdullah would guess at my own past associations? Let's say it is common—then how did he know, or think he knew, that Skip and I would be coming? The answer: The Mukhabarat had their eye on Little Jonnie the American writer, that lone traveler keeping notes in their den, hanging around jobless and aimless in Aleppo. Twas my pen condemned me! writing choice
Post a Comment
Location: Palmyra, Syria
Read more

You Can Never Leave

- October 13, 2009
If a pistol is put in a story, eventually it has to be fired. —Checkhov Jean and I cleaned up the roof a little after waking up there in the morning. “Imagine if some girl came up here,” said Jean of the couches covered in drunken nests, the roof in cigarette butts, peanut skins, and broken cans of Egyptian beer. “She would think this place was crazy.” We breakfasted on falafel rolls with egg and a big blended juice at a vitamin bar, and watched some Syrian soap opera on a television above the counter. That day two Polish girls had checked in, and Ahmad arranged for Jean and Jon to join accompany the small tour group he had arranged. One was Carolina and the other Dagmara, both very pretty and Polish. They both worked at the museum of a science institution in rebuilt Warsaw, Carolina managing and Dagmara arranging an exhibit of interactive media. First Ahmad brought us to a nearby mosque, to a cemetery with a great block tomb topped by two towers, the sarcophagus of a Pole who convert
1 comment
Location: Aleppo, Syria
Read more
More posts