Showing posts from November, 2010
Show all

Photographs of a Year Abroad 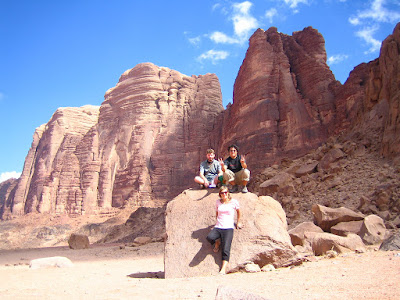 For those readers who missed it,  here are 110 favorite photos from my 2009 to 2010 trip through Western  and Eastern Europe , Greece and the Balkans , the Near East , India , Southeast and East Asia . Click here for the Flickr album.
Post a Comment
Location: Portland, OR, USA
Read more

What A Long Strange Trip It's Been

- November 18, 2010
Round the world! There is much in that sound to inspire proud feelings; but whereto does all that circumnavigation conduct? Only through numberless perils to the very point whence we started, where those that we left behind secure were all the time before us. —Herman Melville, Moby Dick Take a look at me, at what adventurer now crosses the threshold again after all the challenges, revelations, transformations, and atonements of a hero’s journey—for I had been heartbroken, hospitalized, and robbed blind; forced to bribe border guards, to ride on the rooftops of jeeps and sleep on the rooftops of buildings.  I’ve played harmonica in the open door of the old trains that cross the Deccan, and I’ve howled at the moon with drunken Burmans in the Shan hills.  I’ve developed charade hand signs for everything from “Where is a hotel?” to “Make it spicy.”  I’ve told girls, “You’re beautiful,” in a dozen languages.  I’ve swam in seven seas.  I’ve survived the twenty-two thousand miles of road and
Post a Comment
Location: Portland, OR, USA
Read more

- November 17, 2010
Round the world! There is much in that sound to inspire proud feelings; but whereto does all that circumnavigation conduct? Only through numberless perils to the very point whence we started, where those that we left behind secure were all the time before us. —Moby Dick Don DeLillo wrote of California , “The place had that edge-of-everything quality that creeps into innocuous remarks and becomes the vanguard of estranged feeling.” He was certainly not thinking of Inglewood. I hated the place, despite the fine weather, and was only staying at a hostel in that foulest suburb of L.A. because of its proximity to the airport and to Union Station. So I woke before 7 a.m. and took a shower in the grimy tub, had a muffin and an egg sandwich in the hostel restaurant, which looked like a breakfast restaurant at any cheap hotel anywhere in this country; and took a bus through L.A.’s downtown and Chinatown to the grand halls of Union Station, because I had reserved a ticket for the Amtrak Coast S
2 comments
Location: Los Angeles, CA, USA
Read more

- November 15, 2010
I’m working on leaving the living. —Modest Mouse Jean told me once that the Japanese are obsessed with the ephemeral—“Can I say that?” “Yeah it’s the same in English.”—that what is fleeting and soon to die is all the more apparent and beautiful for the immanence of mortal fate. The cherry blossoms bloom but once a year in Japan, and then for only two weeks before falling gloriously, dying violently at the height of grandeur and without the long, slow rot that follows the Springtime of life. The weather bureau announces the dates so all can plan a suitable hanami , or “flower viewing”—generally a picnic or excursion to some famous place where the sakura trees line the way with pink and black against the blue. But Fall had arrived when I had, with her full colors and her wintry breath. In that time of year, the Japanese will travel hundreds of miles to see a sight by autumn’s red-gold light, and how the leaves change over the temples and shrines, and how they carpet the ground. Such
5 comments
Location: Tokyo, Japan
Read more

- November 07, 2010
Things never work out like you think they will, but that's what makes life interesting. —Haruki Murakami I hardly slept aboard the five hour ferry to Takamatsu. The sleeping room on-board was divided into a few sectors of tatami mats on which one might lie, but the lights were bright and there were children chattering in the corner, and I was invigorated by the sense of leaving on an expedition. Shikoku is an island sacred to Japanese tradition. Kansai and Kyūshū girdle the northern side, creating the mild Inland Sea between, and the south is exposed to the Pacific. Eighty-eight temples ring the wooded coast, and most Japanese wish to see them all one time in their life. The center of the island is mountainous and seamed with valleys cut out by the country’s cleanest rivers. I was awake when the boat arrived in port, though the sun had not yet risen; and I shouldered my bag, lighter then because of all I had left at Jean’s garret in Osaka, but stuffed full of his arctic weathe
4 comments
Location: Matsuyama, Ehime, Japan
Read more
More posts